Presentation of the 'Coolest Paper' of 2013 Award winner at the IAH Congress in Makarrech, Marocco.

Presentation of the 'Coolest Paper' of 2013 Award winner at the IAH Congress in Makarrech, Marocco.

During the 2014 ECHN Annual General Meeting at the IAH Congress in Marrakech, Marocco, two lucky participants of the 2013 ‘Coolest Paper Award‘ received a free book from the IAH series.

The two lucky participants were:

Congratulations and don’t miss the next edition of the ‘Coolest Paper Award‘.

It is with great pleasure that I can announce the winners of the first ever ‘coolest paper of the year’ competition, organised by the steering committee of the ECHN.

The runners up in the competition were:

There was a very high quality of papers nominated, and large number of votes cast in the competition. Overall a great success!

The awards ceremony will take place at the IAH 2014 in Marrakech, Morocco. Thanks to all who participated, and we look forward to next year’s ‘Coolest Paper Award’. 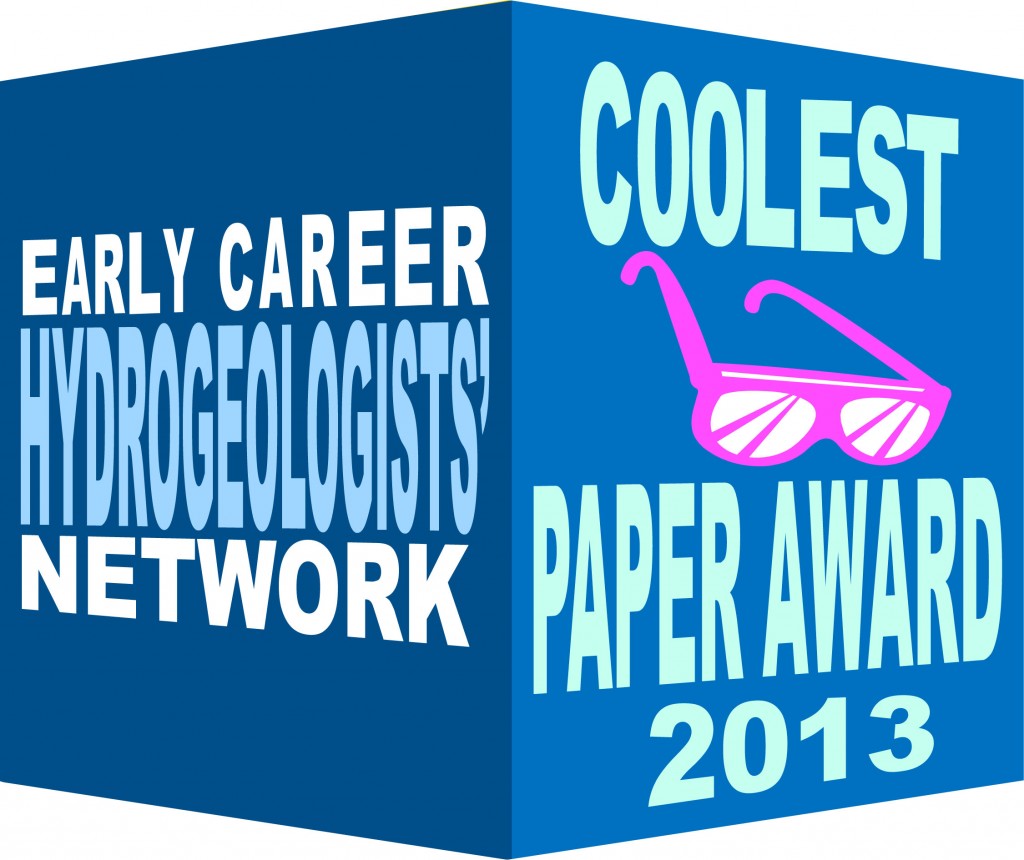 Free membership of IAH for one year, plus a choice of one free book from the IAH book series for the winner.

A random nominee and voter will be rewarded with an IAH book.

The announcement of the award winner will be made at the 2014 IAH Congress in Marrakech, Morocco.

Have you read a paper about hydrogeology this year that made you jump out of your seat? What was the piece of science that really inspired you with its originality, creativity, thoroughness or downright coolness? Here’s your chance to have a say, in the inaugural ‘Coolest hydrogeology paper of the year’ award, run by the Early Career Hydrogeologists’ Nework of IAH.

How do I enter?

Any early career hydrogeologist can nominate any hydrogeology paper published (online or in volume) during 2013 in any peer-reviewed journal (not only Hydrogeology Journal), with a maximum 50-word justification of their nomination.

By March 31, 2014, nominate a paper using this form; please click here to nominate.

There will be an open, online poll in which any early career hydrogeologist can vote for the published article that they consider ‘the coolest’ of the nominations.

The paper receiving the most votes will be awarded the major prize – a year’s IAH membership and a book title of choice from the IAH series.

The prize will be awarded at the 2014 IAH congress in Marrakech, Morocco, where the winning author will be invited to deliver an oral presentation. In addition, there will be a random draw after each of the two phases, and one lucky participant will receive their choice of book title from the IAH series.

We look forward to receiving your nominations and votes!

Share thoughts, questions, and career opportunities on hydrogeology. Connect to us.