Dr. Antonio Hernández-Espriú presenting the 2014 Coolest Paper: “The DRASTIC-Sg model: an extension to the DRASTIC approach for mapping groundwater vulnerability in aquifers subject to differential land subsidence, with application to Mexico City”

The "Coolest Paper of 2014" Award Ceremony

Dr. Antonio Hernández-Espriú, the winner of the ‘Coolest Paper’ Award, has been invited to present his work at the 2015 IAH Internatioanl Congress, in Rome, Italy:

“The DRASTIC-Sg model: an extension to the DRASTIC approach for mapping groundwater vulnerability in aquifers subject to differential land subsidence, with application to Mexico City”

Don’t miss the random draw for two lucky participants of the ‘Coolest Paper’ of 2014 Award that will receive
a free book from the IAH series.

Click here to vote on the ‘Coolest Paper’ of 2014, you can win a FREE IAH Series Book!

After the nomination period, there will be an online poll in which any early career hydrogeologist can vote for the published article that they consider ‘the coolest’ of the nominations.

The first author of the paper receiving the most votes will be awarded the major prize – a year’s IAH membership and a book title of choice from the IAH series.

The prize will be awarded at the 2015 IAH Congress in Rome, Italy, where the winning author will be invited to deliver an oral presentation.

As an added bonus, when YOU nominate a paper YOU will be added into a prize draw to WIN a book of your choice from the IAH book series during the 2015 IAH Congress. 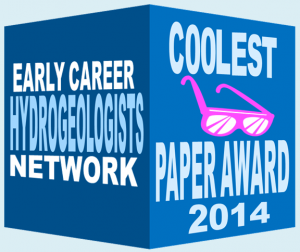 FREE MEMBERSHIP of IAH for one year, plus a choice of ONE FREE BOOK from the IAH book series for the winner.

As an added bonus, when YOU nominate a paper YOU will be added into a prize draw to WIN a book of your choice from the IAH book series!

The announcement of the award winner will be made at the 2015 IAH Congress in Rome, Italy.

We would like to know your favorite hydrogeology paper of 2014. The paper can be from any peer-reviewed journal and by any author.

The only criterion: it needs to be about hydrogeology and you need to be an early career hydrogeologist (hydrogeology student or in the early years of professional work) to vote.

Once nominations have closed we will open voting to decide the most amazing, inspirational, engaging, cool hydrogeology paper of 2014. In addition to being widely recognized as an inspiring author, the winner will receive a year’s free membership of IAH and an IAH book prize of his or her choice.

Check it out the 2013 ‘Coolest Paper Award’ winner.

How do I enter?

Any early career hydrogeologist can nominate any hydrogeology paper published (online or in volume) during 2014 in any peer-reviewed journal (not only Hydrogeology Journal), with a maximum 50-word justification of their nomination.

May 31, 2015, nominate a paper using this form: please click here to nominate.

We look forward to receiving your nominations and votes!

A forth-part video clip series chronicling the IAH Early Career Hydrogeologists “Coolest Paper of the Year Prize” competition. The purpose of the competition is to stimulate the early career hydrogeologists to share and discuss new and exciting hydrogeology research. This year, the winner of the prize will be announced and presented the prize at the 2015 IAH congress in Rome, Italy.

Part one of this series introduce the 2015 IAH congress in Rome, explores the main global hydrogeological challenges and reminds abstracts submission deadline.